Public Grief: How have things changed? 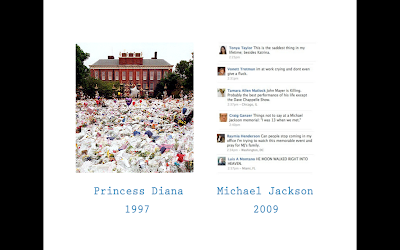 The death of Princess Diana was one of my first memories of someone very famous dying. If i'm honest I will admit to remembering more about her death, then her life itself.

Many people refer to Diana's death as being a day that will remain in the 'memory of the British public forever.'

In England grief is generally a private emotion, experienced only within a close network of friends and family who knew the person. Diana was a public figure, 'the people's princess,' this made people feel like they could share in this loss and publicly express the grief they felt. Through this shared emotion a bond was created within the British public, for a couple of days millions of people shared an experience and felt like they had a right 'to grieve'.

"Many people across the country brought [flowers] and placed them along with very personal messages written on attached cards ... A single flower with a message ... read 'Beautiful Lady, Rest in Peace, With Love, Sam (A homeless friend.)' "

The Mourning for Diana (edited by Tony Walter) 1999

Through this example we see how a huge majority of people engaged in communal grief. Public grief is a “way of rebuilding community,” through grief we feel a connection to each other and associate with each other in an emotional way.

After studying the topic of Digital Death, for around a year, the death of Michael Jackson took me by surprise. It was another example of public grief but this time flowers were not the main feature. The death Michael Jackson marked a landmark in digital culture because so much of the public grieving, remembrance and memorialization took place in a digital environment. Many people even discovered the news of his death through online sources and the reaction of the digital community was immense.

Even in somewhere as niche as my own network of Facebook friends around 70 percent of friends commented on his passing, many lamenting this loss in some way, either by donating their status as a tribute e.g. "RIP King of Pop" or perhaps by tagging their favorite song on You Tube. The internet allowed for this connection to spread quickly and visually and Michael Jackson will not only remain in the memory of the public but in their processors and networks.

The presence of the internet meant that any person could quickly and cheaply announce to the world, that they too, were sad that he is gone and that collaborative grieving was no longer focused within a specific community or even a specific nation, now people from all over the world have the opportunity to group together and feel that moment of connection (togetherness.)
Posted by stacey at 07:49